The Trocks Return to London March 23

The delirious Les Ballets Trockadero de Monte Carlo, now at the Peacock Theatre in London, personify all that is silly and sublime about ballet. This company tackles some of the hardest works in the classical repertoire, and the dancers are so good that I could praise their artistry without ever pointing out their two most salient characteristics: all the ballerinas are men and they are very funny. Deliberately. Imagine the questions you may have pondered when bored at “Swan Lake”: What if he drops her? What if they miss each other? What if the third swan turns left instead of right? What if she’s too heavy? Or forgets the steps? Or comes on stage when it’s not her turn? All these catastrophes happen at a Trocks performance while the dancers bash on regardless, resplendent in tutus and false eyelashes. Their showing-off and tantrums are hilarious. The sight of a hairy-chested Odette perfectly executing the balances in the pas de deux from “Swan Lake” while explaining in mime that she’s not really a swan and wants to get married and thumps Rothbart for getting in her way is simply a riot. Hips and Tips They stick as close as physiognomy allows to the original choreography, and that is miraculous in itself. Ballet is unnatural. No woman is made to turn out her legs at the hips or bend backward or stand on the tips of her toes. How much less, then, are men shaped for it. Make no mistake, every slip, stumble and fall is deliberate, for these are superb dancers. They are identified by their stage names as Ida Nevasayneva — a fantastic feather-shedding Dying Swan -and Margeaux Mundeyn, Nadia Doumiafeyva and Tatiana Youbetyabootskaya. Try saying those names aloud. The Trocks started in 1974, performing in New York lofts, one of the many outpourings of the Gay Pride movement known as Stonewall. It says much for them and for their audiences that last year they had a week-long residency at the Bolshoi in Moscow. They are the main attraction at theaters throughout the world and stars such as the Royal Ballet’s Leanne Benjamin appear with them as guests. Shaky Lifts Even the curtain calls are more fun than most ballet performances as the dancers fight over the flowers and the bows. Each dancer has a personality and sense of humor that gives verve to the whole. I’ve seen regional ballet companies that can’t hold a candle to the Trocks technically, and if they have an obvious problem with lifts (men are heavier than women) they have an equally obvious advantage of strength. The 16 dancers, cross-cast through all the ballets, perform an abbreviated “Swan Lake”; the “Grand Pas de Quatre,” a wonderfully bitchy catfight among the four great 19th-century ballerinas, Taglioni, Grahn, Grisi and Cerrito; George Balanchine’s incredibly difficult “Tarantella”; Anna Pavlova’s “Dying Swan” solo, and almost the whole of the last act of “Paquita” where the tiniest man is allowed to partner the heaviest ballerina to predictable ends. They must have been exhausted. I was, just from watching them and laughing.

Join us on May 25 for a virtual studio performance event! 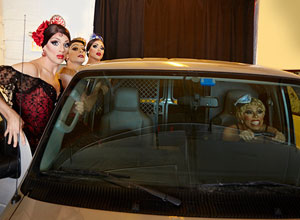 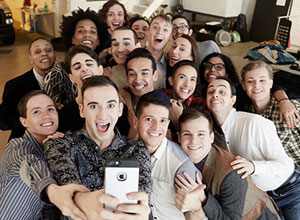